34 users rewarded @oluwastoner 328 Smoke for this post over on Smoke.io.

As usual, I write mostly to a certain audience on smoke.io which are Nigerians. I have a lot of stoner friends on Twitter and Facebook. So most of my post will be strictly focused on cannabis usage in Nigeria. Because I write not just for the smoke I earn my predominant reason is to share knowledge with people around me. Some days back one of the biggest celebrity Whizkid dropped a tweet: 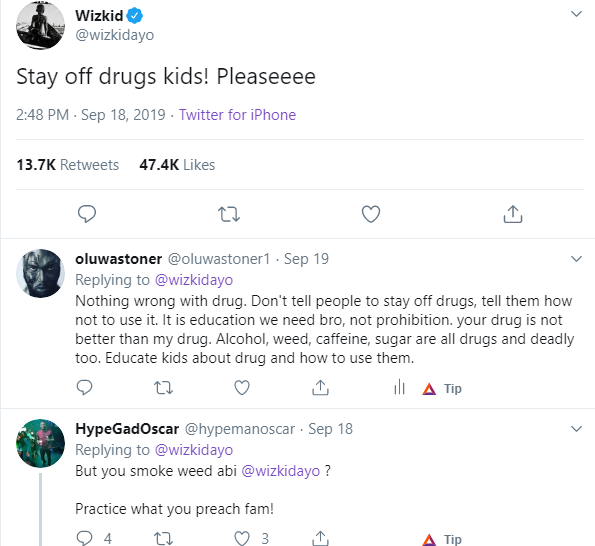 Not long one of his followers replied to him:

And then I realized that we truly cannot win in the war on drugs. What we truly need is education and not prohibition. That dude tweet made me start up this series "We all should be stoners"

Why should we all be stoners in Nigeria? I started consuming cannabis at school just for the euphoria and intoxication. I didn’t know much about cannabis I just notice some set of young blood in the hood where I stay usually come to my compound to smoke weed and pop pills out of peer pressure I started smoking and popping pills too. In the west poor people consume meth because they cannot afford better drugs in Africa poor people pop tramadol and Rohypnol because it is cheap and they cannot afford cocaine or crack. That is the reality here. So for me, it was tramadol and diazer. After a year plus I was emaciating and looking so sick because tramadol was killing me inside so I stopped and struggled with severe withdrawal symptoms then I started to read about ways to combat the WS until I stumbled on an article by high sobriety which explained how opioid abusers used weed to combat the withdrawal symptoms. this is almost four years free from tramadol withdrawal symptoms. Weed became my closest companion and then I became more interested about reading and writing about cannabis.
When I grew older I started struggling with anxiety which leads to sleep deprivation(insomnia) and I remembered that my mother struggles years with anxiety and insomnia too which latter lead to stroke and total paralysis. My mum use to drink alcohol to combat her insomnia then. I was very close to her and I was the most trusted. My Dad hated her drinking alcohol so she lied to him that she have stopped drinking and then she will have to call me in the middle of the night to buy her some Guilder (her favorite brand) I will have to wait at the bathroom for her to drink it then I will rush to hide the bottle in my school bag so that my dad won’t know. She never drank beyond one bottle. So you know she wasn't doing it for intoxication she just wanted to forget about her worries and sleep. She and I did this for years until she became a devoted Christian and she stopped drinking. But her worry didn’t stop and her insomnia increase she was always praying to God to help her sleep in the night. I will always wish God answered her. Months and month passed until she had a stroke attack and she later died in my hands. That alone made me depressed. I wish I knew about cannabis then. I sincerely would have given her edibles or prepared some tincture for her so at least she can sleep. Why am I sharing this story? Not for sympathy but So as to let us know how cannabis can properly serve as a wellness product and how we can save people around us.

For anxiety and stress, This stress can be attributed to long days at the office, Lagos traffic and hold up, poverty and lack of what to eat the next day, nagging issues in our relationship or just general financial burdens. This is our present everyday struggle and it isn’t new especially in a third world country like Nigeria. Anxiety isn't new. Our ancestors also went through different stressful phase of their life. From competing with other humans and predators, from slave trades by the colonial master, from hunting and the fear of being hunted. But when modern humans evolved 200,000 years ago, stress served an entirely different purpose. Although the causes behind stress and anxiety felt by modern humans was totally different from our ancient counterparts, the brain’s response is identical. So for us to be able to tackle stress now we need to know how the ancient humans combat stress then. ethnopharmacological researcher Christian Rätsch writes that cannabis was used as early as 3000 BCE to relieve stress. In fact, they called cannabis “the plant for forgetting worries.”

HOW DOES CANNABIS HELP IN FORGETING WORRIES FOR OUR ANCESTORS? in order to understand how cannabis function in combating stress, we must first understand the systems that exist regardless of cannabis. Which is called ECS (endocannabinoid system) this system is in every mammal's such as humans, dogs, lions, and whales e.t.c so whenever we are stressed out or going through a physiological stressful phase ECS activate so as to produces endocannabinoids to combat stress. In 2012, some German researchers completed a study, that showed that endocannabinoid signaling ensure an appropriate reaction to stressful events, and referred to the ECS as “a regulatory buffer system for emotional response.” So since we have ECS why do we need cannabis? Our body only produced endocannabinoid on demand they are never stored, you can run out of endocannabinoid if you go through too much stress and When this happens, the ECS becomes unbalanced which can lead to a lot of mental health problem. Most people struggling with anxiety or depression are lacking endocannabinoid. And this is where cannabis comes in to boost our ECS to produce enough endocannabinoid. So anytime we are stressed and we consume cannabis what we doing, in reality, is actually boosting our ECS. Mind you There is a thin line between reducing stress with cannabis and actually increasing it. This comes with dosage “Start low and go slow.”

Now you can see why cannabis help in treating stress and anxiety which would have helped my mother.

If more people become aware of how to use cannabis for treating anxiety and combating stress we will have more happy individuals around us and the world will become a better place. We are the only species on earth that have co-evolved with cannabis we will realize that cannabis is as important as the air we breathe in. What we need in regards to cannabis isn’t prohibition but education. The National drug law enforcement agency will be more useful if they spend time educating people on how to properly consume weed than arresting and killing cannabis users and dealers.

This is the first series I will share more episode throughout this week.

27 users rewarded @goldendawne 1145 Smoke for this post over on smoke.io.
offtopiccbdcannabishealthsmoke
Kaneh Bosm - The Divine Miracle Plant - Free Book on Kindle
@offgrid created this post on May 8, 2020

41 users rewarded @offgrid 316 Smoke for this post over on smoke.io.
health
My salvia trip!! 👽 #anotherpsychedelicsubstancethatIhavetested
@luismy created this post on Oct 8, 2019

192 users rewarded @luismy 142 Smoke for this post over on smoke.io.
offtopiccannabispsychedelicshealthgrow
Moby dick x Church just to be harvest!!
@luismy created this post on Oct 1, 2019

29 users rewarded @luismy 200 Smoke for this post over on smoke.io.
growofftopichealthsmokingstrains
Is Cannabis Really For Pain?
@oluwastoner created this post on Nov 2, 2019

30 users rewarded @oluwastoner 236 Smoke for this post over on smoke.io.
health